>I grew up, like most in the US, eating hard shelled tacos made from taco seasoning mixes and with those kits you can buy at the grocery store.

That is all I knew of the taco.

I knew it was hard to eat once you hit the top ridge – and they were completely unstable, especially if you cooked the shells for too long.
Generally it was filled with ground beef. You cook a pound or so of ground 80/20 beef – drain the fat, add a little water and the “seasoning” packet and Voila! You have homemade Taco Bell in 15 minutes!
And God, I did love these things.
I still do.

It wasn’t until I dived into my first “legit” taco that I became a fan of one my all-time favorite meals.
The taco-truck style taco.

I was unfamiliar and nervous.
A food truck…generally in the parking lot of some other random business with a few picnic tables and various bottles of hot sauce and condiments.

And cheap.
$1.75 for an asada taco or pollo or lengua or carnitas or anything braised and falling off the bone.
I found salvation in this food.
So simple. So good. It found a home in my heart.

They generally stuff your meat of choice in between two layers of white corn tortillas [never flour] and topped off with a few pinches of chopped white onion and cilantro.
On the side generally comes a few wedges of lime and some sliced radishes…(Usually depending on the season).

There’s something about that combination of crunchy white onion, cilantro and lime that infuse all layers of your palate.
The best part is, I’ve learned to make this dish at home, and I think you should try it.

First, you gotta figure out what kind of meat you need.
For me, it’s always pork. Pork has this delicious salty fat that I think brings out a better braising situation. It’s also a meat that tends to be a bit more moist in the final product.

I generally buy a 1-2lb pork roast. (Depending on how many people you’re feeding) If you can, buy it with the bone. I think it tends to be a more flavorful cut of meat.
1 – Yellow Onion (for braising with the pork)
1 – White Onion (for garnishing your taco)
2-3 tbsp chili powder
2 cups beef broth (if you don’t have broth, water works fine.)
A tiny bunch of cilantro (depending on how much you’ll use to garnish)
1 1/2 tbsp salt
1-2 tbsp pepper
3-4 cloves of garlic
The juice of two lemons & a few limes for garnish later on.
A bag of white corn tortillas

I use our 4-quart dutch oven, but any big pot with a good tight lid should work fine.
I cut up the pork into 2-inch pieces and drop them into the pre-heated pot with a little olive oil for browning.
I go ahead and throw in the yellow onion, medium chopped.

After the onions have browned a bit, I add the two cups of beef stock and fill the rest of the pot up with water until you barely submerge all of the pork in liquid.
This is also when you add your dry seasonings; salt, pepper and chili powder.
You can also, at this point, add the lemon juice and the cloves of garlic.

The rest just takes time.
I put on the lid of the dutch oven and let it cook for a good 2 1/2 – 3 hours. Check every now and then to make sure the meat isn’t sizzling to the bottom of the pan.
After a couple of hours, the liquid will start to reduce, leaving the meat tender enough to pull apart with a fork. And you’ll actually want to pull it all apart with a fork and give it a good stir to pick up all those bits from the bottom of the pot.

After the meat is done, I just warm the tortillas up in a pan by sprinkling them with a little water and heating each side for 15 seconds or so. (It’s easier if your pan is pretty warm…)

Prepping is pretty straight forward. Place your meat in the tortilla – top with cilantro, onion and squeeze a couple of slices of lime (to taste) and indulge your palate in a wonderful barrage of simplicity and culture.

You should have an end product that looks something like this: 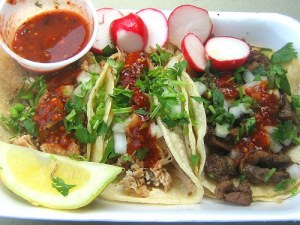 I’m not good at writing recipes, so bear with me if they are super confusing. It’s definitely harder than it looks to explain to someone how to cook without actually being there to show them.
There are tons of recipes on the internet and youtube, so don’t be intimidated.

Bon Appetit! […hence my lack of spanish — which would seem more appropriate than French… 😛 ]