>I’m a sucker for a good cookbook.

I wrote one time that cookbooks gave me hot flashes. It’s funny, I think, and maybe a little bit true.
Okay, I don’t really get hot flashes, but I do get giddy over new cookbooks. Especially these days, because it seems folks are really coming into their own narrative. Chefs are generally awkward and compulsive jerks [even the ones smiling on TV], but sometimes, you get a glimpse into their story and it makes sense.

I can’t speak well enough of “Ad Hoc”, by Thomas Keller. From what I’ve heard, his other cookbooks are a bit intensive if you’ve never cooked professionally or even understand the ingredients. I struggle with that a lot. Technique and knowledge of ingredients is just something you have to work on constantly. Ad Hoc differs because it’s mostly home-style food…but done really, really well. And it looks so pretty! His opening bit talks about the last meal he cooked for his father, saying, “Always remember to take care of your parents…”
From cooking some serious chicken pot pie and using duck confit as an ingredient, to putting together your basic stocks and vinaigrettes, I can’t seem to put it down.

“Charcuterie” by Brian Polcyn and Michael Ruhlman is a necessary book for folks interested in curing their own meats. I’ve researched books on drying and curing meats and have always been directed back to Charcuterie. It’s where I draw my recipe for bacon – but if you want to get fancy schmancy, they give great recipes and techniques for patés, terrines, sausages and other dishes requiring forcemeat. (Forcemeat generally applies to any meat or meat by-product that is ground and “forced” into another shape. Kind of like hamburgers and hotdogs…kind of… 🙂 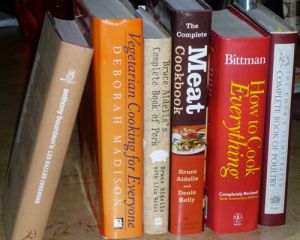 Try buying cookbooks that include recipes you’ll actually want to eat. Not everyone wants to cook classical French or cure their own pancetta. If a recipe requires an ingredient you have to order by mail, you’re probably not going to cook with it too often.
Peter Reinhart’s “Artisan Breads Everyday” is a book I’ve been going to weekly for my gluten fix. I think baking bread can be an intimidating task, but Peter Reinhart seems to be known for making it a lot less daunting. The book does a great job at explaining what dough should look and feel like without making you feel completely clueless.

I think that’s where I’ve always been stuck when it came to recipes. Lots of cookbook/recipe writers don’t explain very well what you should be seeing or smelling. Such as, “Your dough will probably look like a course, shaggy ball. This is good! If it gets too dry, add a little water. Add more flour if it’s too sticky.”

Look for good explanations and realistic recipes.
Smudge it up and don’t worry about spilling crap on the pages. It’s gonna happen and I think they (and you) look better for it!

Get to cooking, my foodie friends!

One thought on “>cookbooks and hot flashes”