In Defense of Paula Deen…y’all

I am as deep as the next foodie in the Bourdain/Chang gang.

Funny enough, I find myself in the position, at least in my own mind, of defending Food Network hosts like Sandra Lee and Paula Deen. 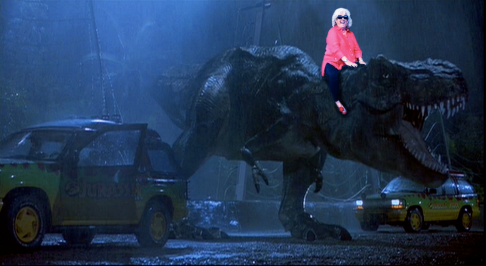 Why? Well, because they relate most to my people. And by my people, I mean family. I mean the people I grew up with and the blue collar cooks of the United States.

BUT…I will say I don’t agree with most of the things they cook. Semi-homemade food makes it more doable, but to be honest, pre-made food in boxes and cans is NOT good for you. It’s best, considering you are cooking at home, to REALLY cook from home. Scratch cooking is best.

As for my defense of Paula Deen, yes, she cooks food that is not healthy. She deep fries bagels and tops them with gravy and bacon and fried eggs. (Which most Portlanders would wait two hours in line to eat) She bakes sweets that’ll strip the enamel straight off your teeth. Is it a surprise that she came out as diabetic? No.

Can we learn something from all of this? Of course.

But as human beings, we have a choice as to what goes in our bodies. TV hosts who have attacked Paula Deen eat unhealthy food all the time. They’re just not promoting it as much. They eat food we wish we could handle.

And what about that McDonalds suit a while back? The one where the girl sued McD’s for making her fat? We, who have the choice and luxury as to what we eat on a daily basis, are at fault.

Now about that choice part…

Just because Paula Deen deep fries most things or [unnecessarily] adds unhealthy ingredients, we do not have to follow suit. And if you want to eat one of the things Paula cooks, then do it. But do it in moderation. I wouldn’t eat a meal purely designed of such high cholesterol intake, but maybe a party or a place where it can be spread among several, instead of straight into your own caloric allowance.

I’m an advocate for getting folks in the kitchen. If Paula or Sandra helps us to do this, than so be it. Just don’t eat their food all the time. Let it teach you how to cook for yourself. After all, if it wasn’t for food on TV, I probably wouldn’t be writing these things. I wouldn’t cook as much nor would I advocate for this kind of change.

There is a place for this food and maybe every now and then, that place is on your plate. All the others times, let’s work on making ourselves better.

Especially Miss. Dean who has the power to advocate better eating…