What is meaningful work?

I feel like I fight with this notion on a weekly basis. Are lawyers and tax specialists more important than cooks and dishwashers?

Here comes the battle over what is and isn’t. At least in my own head.

In this line of work, we attract the folks that are in transition. College students or folks who need some way to make money on the way to their “dream job”.
I thought I was on my way to a dream job. Something like non-profit work where I would help folks out of poverty or something. Ya know, something meaningful?

And then I graduated into a terrible economy. On my way up to Portland, I was offered a job at a cafe by some friends of Hannah. I fought it hard. I didn’t want to get into this stuff. My heart was headed elsewhere. A sit down job, maybe a few errands for the boss, but something ultimately fulfilled with meaning and purpose.

I spent most of my first week bent over in front of deep sink washing dishes and showing people where straws were. I had my first angry customer experience and didn’t figure it would get any better.

And I’m still doing it.

I read an article a few days ago on meaningful work.
It talked about why some work is not deemed “meaningful” by society. Like the folks who pick up our trash and make you your coffee in the morning. Because, these are jobs that people don’t want, right?

The piece goes on, digging through issues of self doubt, when the writer exclaims that it’s these jobs that give us the most. It gives us work ethic. Just because it isn’t the job you want, doesn’t mean you can’t learn great things from it. We learn that it’s good to be on time. We value customer service and are ultimately nicer people for it. (At least in my experience.)

Good work ethic makes you less of an asshole. 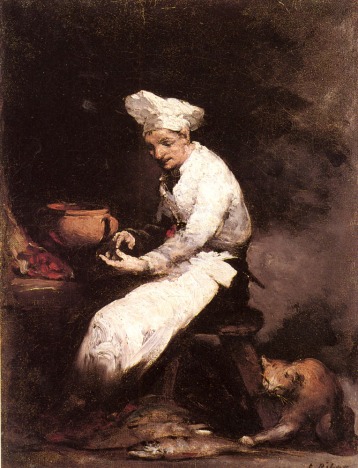 Being on time is huge. Getting the job done well takes time to learn. These are SUCH meaningful skills.

Most people I know wouldn’t argue with me. Mostly because I give them free coffee from time to time. (E’erbody loves a hook up in the food industry, that’s fa sho.) And why can’t being a cook be good enough? There are thousands of cooks in this world. Many of them don’t like it and cook shitty food. Then, there are others who understand. They understand that their work is important, regardless of the money and long, back breaking hours.

I guarantee you put a cook or industry worker (who’s been doing it for quite some time) on another type of work, and they will pound away at it. They will be pissed at themselves for inevitably screwing up. As a cook knows, you will screw up and you’ll learn how to NOT do something.

I think if you’re allowed to be yourself at your job and if you come home feeling good about what you did, your work is meaningful. And you may have your own reasons for finding meaning in your work. That’s what is most important.

I’ve learned so much from the people I work with and under. They are true lovers of humans and their condition. Tired, frustrated, and so happy when they see people enjoying something they made.

but I can tell you one thing…

and that’s something to be proud of.

One thought on “On Meaningful Work”

© Josh Casper and Southern Belly, 2014. Unauthorized use and/or duplication of this material without express and written permission from this blog’s author and/or owner is strictly prohibited. Excerpts and links may be used, provided that full and clear credit is given to Josh Casper and Southern Belly with appropriate and specific direction to the original content.
Loading Comments...
%d bloggers like this: