I will at times, explain myself as a “working class foodie” — meaning, I work hard making not so much, but find the means to eat good food. Or at least food that I think represents something good.

But then there are the hoards of people who devour experiences for the sake of its name. “Have you eaten at So&So!?” Being a foodie these days can be a symbol of status. We are engulfed in the sum of our dining experiences. What the term “foodie” has become, at least in my head, is a somewhat privileged group to belong to. A group that takes pictures of every dish they ever eat and post it to their foodie blog (such as this!) to allow others to discuss the absurdity, technique and deliciousness of ‘said’ dish. 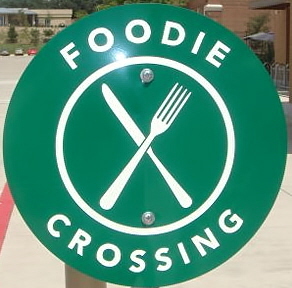 Now I realize I may be writing a huge contradiction.

For the life of me, I cannot call myself a cook — it feels unearned. I don’t do it for a living, but I do it every. single. day. And I think that I’m pretty okay at it. But I also don’t want to call myself a foodie.
I love food, but realize the majority of the world lacks this basic need.

And this is where things start to shift.
I love the ritual of eating and cooking. I love what it means to other cultures to sit down and to eat and enjoy one’s community. The table is, as I always say, the great equalizer. Eating at the same level is important to me. Feeding others…is important to me.

And what I buy — how does it affect this world? I used to be much more of a voice to the epidemic of poverty and injustice — at least outwardly. I traveled to India and lived there for four months having everything stripped out from underneath me. I was humbled and brought to a new realization that the world is big and that I have no idea what I’m doing. Food was always there to bring us together at the end of the day. Food was guilt, as a child would walk by my side, motioning for what I was on my way to get. Food was what the men at the home for the dying reached out for — especially when it was fried fish. Feeding another is taking the tiny bones out of a tiny fish and feeding it to another man with your own fingers because he can’t move his own.
It also means having dinner ready for your partner when he or she comes home from an insane day of commuting and school work.

So what does it mean to be a foodie?

Value the things you put in your body. Value what you feed others. Be careful not to glorify the act of eating in a seat of privilege, but by loving and respecting the people who helped fill your belly. It also comes with the respect that an animal may or may not have died for your meal. Or that a person was bent over for eight hours picking your vegetables. Because believe it or not, our food comes at a high price and if we don’t value it as such, we are in way over our heads.

Maybe, at the end of the day, I’m just a house-cook who likes to eat good food..

One thought on “What it Means to be a Foodie”