I tell people I have soup anxiety.

I may have touched on this before. It is ridiculous. You don’t have to tell me that.

It’s mostly the lack of substance. The brothy-ness and the fear of being hungry while our dinner companions talk for three more hours about their 8th grade tirades and how ‘nerdy’ we all used to be. (Trust me, if you’re playing soccer in 8th grade, you’re probably NOT a nerd — or at least in my view of the word.)

But I really like soup! I do, I do. I promise. It’s just not the first thing that comes to mind when I think, “Oh, dinner…”

Understanding soup basics was huge in my learning how to cook better. Usually in culinary school they start you at stocks, soups and sauces. Since I haven’t attended culinary school, nor will I ever, I did like most self-taught cooks do — I jumped in it.

I mean I got all up in that sauce talk.

I learned about stock and bones and fat.

I’m not gonna talk like I’m some pro at making soups. But I’ve made some good soups, just like you folks. (Or who at least claim to make the best chicken soup.) I’ve also talked about making different stocks as well. If you’re interested, just hit up that search engine. The world is full of people who can tell you how to make soup. I’m not different. I just thought I could bring a little humor to the conversation. 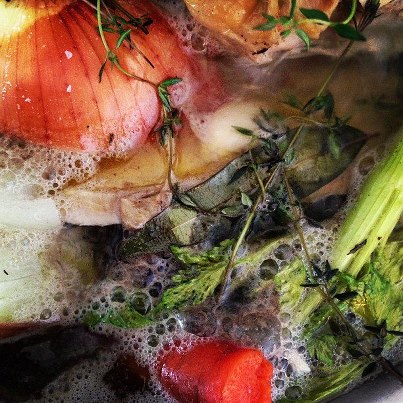 First of all, eat roast chickens. Why? For the bones!
Wrap them up tight, and stick em’ in your freezer. Collect about 4-5 carcasses before you want to make a big batch. Your ratio of bones to veggies is so much more than you probably think. Probably equal to the amount of all the veggies, you should have bones, plus more. If they are raw carcasses (sometimes you can buy them like that), roast them in the oven till nice and brown, and then cover them with COLD water. Add your carrots, onions and celery. Maybe a few peppercorns, bay leaf, thyme and garlic. Oh yes, garlic. So good for you and your brothy-obsessed bodily functions.

Do the same with beef bones, if you have em’. But you probably don’t.

If you really want to impress someone with a killer chicken soup, make a double stock. This is when you use an already existing chicken flavored broth and add more bones to it. I mean, decadence.

Huge flavor. That’s what you really want, right? For example, if you’re making a chicken soup, boil your raw chicken in some water. After your chicken is done, throw in your bones and vegetables and crank down on that stock. And then, strain all that stuff out and continue to reduce your liquid. It’ll keep getting better, and better.

This will elevate your soup to another level. And at the risk of sounding even a little close to Guy Fieri, I’m gonna back off. Because that dude is an introverts nightmare.

I love soup that has something extra in it. Meaning, things besides vegetables. For chicken soup, we generally add rice or else ten minutes later, I’m eyeing that bag of Pirate’s Booty white cheddar corn puffs that sit not so far away from my subconscious and comfy brown chair.

Add lentils! Add beans! Add greens! Throw some chopped up kale in there during the last 15 minutes or so of cooking.

Add proper salt. Every time you make bland soup, some one else decides to make a Harlem Shake video. And we don’t want any more.

If your soup turns out to be too rich, add a few dashes of vinegar — either sherry or red wine or something of the like. I usually always add a hit or two of some kind of vinegar. Adds nice balance. And folks, it’s all about balance.

Then there are the flavor and umami boosting agents. Tomato paste, fish and/or mushroom sauce, and worcestershire. At least those are the most common you might have back behind your Sriracha sauce that you might, but shouldn’t, put on everything.

But hey, who am I to judge you and your need to make everything taste spicy.

Maybe it was helpful. I know it’s helped me.

it’s the soup of the day

83 thoughts on “make a better soup; be a better person”